After playing Oblivion I’ve been thinking about how decisions for adding features to games are made, and how it could be improved. I think the best way to judge a feature is on its benefit to cost ratio. That is, how much it adds to the game against how ‘expensive’ it is to put it in. I’ll begin by breaking down what I mean by ‘benefit to cost’…

Benefit: This includes added gameplay, added ‘wow factor’ and adding interesting choices for the player. Some features Oblivion has that correspond to each of these benefits are the lock picking mini-game, the beautiful forests and the openness of doing anything you want at any time.

Cost: The cost of a feature includes development time and the monetary costs, like paying a massive team if you have a mountain of content or licensing a 3rd party engine like the Source Engine. This also includes hidden costs like the impact on a team’s morale if you tell them to implement 76 different ways for the player to cast a fishing line.

Rule #1: The higher your benefit to cost ratio, the more important a feature should be to add to your game.

I believe that too many games have been implementing features whose ratios are far too low and this is having a negative impact on the overall game and on the cost of development. Age of Empires 3 has a good example of both ends of the spectrum. I beliee they spent far too long on the graphics engine for an RTS and while it was very nice, the wow factor only lasted a few minutes before you looked past the graphics to see a rather dull game. There was an extremely high cost for only a limited benefit. If their sole aim was to have prettier graphics on the back cover so more people walked into EB to buy it then perhaps the benefit was more than I give it credit. However either way I think the cost was far too excessive.

At the other end of the spectrum is a feature like the ‘home city’ concept. This had a simple user interface for the user with a few buttons you could order reinforcements and items through. That’s a really low cost, however it added a large benefit with added new features (which also go on the back of the box) and deeper strategy for the player. These are the kind of features that we should be adding to our games.

How high should a feature’s ratio be before it becomes ‘cost effective’ enough to include in your game? This is completely dependant on how much you can ‘afford’ for the feature. This includes how much time you have and the resources at your disposal, both monetary and the skills of your development team. One easy way to look at a feature is what percentage of your resources a particular feature will consume. Compare that to a broad approximation of the benefit it will add to your game. When you look at this from a high level you will quickly see that if one of your secondary features is going to take 20% of your resources then it’s probably worth dropping or scaling back.

Rule #2: If a feature’s ratio isn’t quite high enough, you can often get away with cutting out some of the ‘polish’ of the feature. 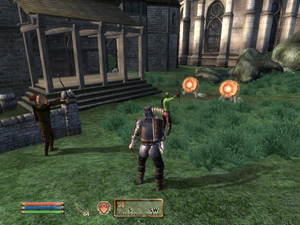 This will reduce the cost required while not reducing too much of the benefit. For example, in Oblivion I saw some archers shooting arrows at a couple of targets. I ran in front of them and they stopped shooting, then they continued when I moved out of the way. Once they emptied their quivers they would walk up to the target collect their arrows and continue shooting. This is quite a complex feature to add, however they decided to simplify it by having the arrows simply disappear from the target when the archer was close, instead of them picking out each one individually. This saved time by removing the need for coders to add in AI and the artists having to make a specific animation that would only be used in this instance. While some people might complain about this, I think it was an excellent decision. There would be no real gameplay benefit from adding this polish and it would have pushed the benefit to cost ratio too high. A game will be forgiven for having some slightly rough edges if it has deep enough gameplay.

To put it another way, I’d rather see 10 features added to a game without every piece of polish and nicety than to have 5 features that are perfectly polished in every way. A good example of this is why I didn’t like WOW as much as most people. It does what it sets out to do really well and is extremely well polished. The problem is that everything seems so static. The amount of interesting choices and gameplay was too small for me. A game like Irth Online which has many more choices but is really rough around the edges has a lot deeper content in it.

Of course, the obvious problem here is that WOW has sold >5 million copies, and most people have never even heard of Irth, or if they have they say it’s ugly and buggy. This is true, and while I don’t think Irth is a better game than WOW at the moment, I think it has the potential to be a much deeper game. WOW is filling a large, previously untapped, market with its simplicity and elegance. However I think we need to move on and start aiming for a deeper experience in our games.

There are some caveats to these two rules. There are certain features which must be added to your game even if their ratio is quite low. Features which are core to your game design and feel of the game must be put in. However, if a core feature’s ratio is too low then I’d suggest re-evaluating that feature and deciding if there isn’t something different you could do. You can also take this rule too far. I’d rather see 10 features which aren’t completely polished than 15 features that have no polish whatsoever (which is where Irth fails). Unfortunately, it’s a fine line with failure on either side, however if done well you can have a masterpiece on your hands like Oblivion or Half-Life 2.

Rule #3: Some features will have a good benefit to cost ratio, but their cost is so high that you can’t include them.

I’m working on a 12 month development cycle (part time) for CIC. Any feature that takes over a month to complete I either have to drop or reduce substantially. I’ve cut features such as walking around your ship, persistent multiplayer maps and having a ‘strategic’ battle map so you can play as an admiral. These features would be great to add, but they’ll have to wait for a later release. In these cases while the ratio isn’t too bad, the cost is just too high that I can’t afford to add it no matter how high its benefit. In these cases I’d be better off adding numerous smaller features in the same time giving my game more depth and being less reliant on a single feature to win players over.

I’d advise looking over your feature list and making a rough approximation of benefit to cost ratio for each feature. If you find any that are glaringly low then rethink both your design and your schedule. This is especially true if you are an indie developer as you must make your limited resources as cost effective as possible and looking at each feature in this way will help keep you on track.