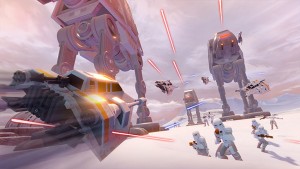 ame development comes in all shapes and sizes. I’ve interviewed mostly independent developers from small companies in the past. Today I have an interview with Asher Einhorn who has worked on a billion dollar franchise as a game designer. However, he did not start out as a game designer, read on to find out more.

Hi, my name is Asher Einhorn. I’ve recently worked on the Disney Infinity games and the Formula1 racing series in roles ranging from programmer to game designer.

As for favourite games, there are a few stand-outs. Journey for the way it uses game mechanics to create a relationship between the player, the world and other characters.

Portal for being truly a pure computer game, and for motivating me to pursue game design.

Gears of War for its clear mechanics. Zelda for providing what I still think is the best format for an open world game. The Jak series. Uncharted for its fantastic pacing, writing and cinematic action. The list goes on, but you can see a pattern – third person adventures. Oh and Magic: The Gathering, for giving me the way I now approach designing core mechanics, as odd as that sounds.

By that I mean it’s something that couldn’t exist as anything else. The storytelling exists totally as part of something interactive. It’s through playing the game that you begin to explore and understand that there’s even a story at all. It’s essentially the opposite to a ‘cinematic’ game where cutscenes are sandwiched between bits of gameplay. As fantastic as these games are they can be thought of a little like films with bits of gameplay littered through them. It managed to be clever, charming and completely engrossing while always staying true to the medium.

On Disney Infinty I had a lot of influence with the overall design of the play set our studio was making (Pirates, Guardians and the upcoming Rise of the Empire), which was really great, but generally I mostly focus on mission design and core mechanics, which are entirely different in quite interesting ways. With core mechanics you’re creating the DNA of the game, just how it works, which really appeals to me a lot.

Mission design is also very interesting but in a totally different way – you’re thinking about pacing, about encounter flow, about rising and falling pressures in combat. It feels like much more of an art compared to systems design which feels more like you’re engineering a solution to a problem. The two are very linked also, as a mission designer you essentially use the tools that arise from how the core mechanics are set up. It’s a pretty useful thing to know about both sides of the process.

More often than not these days, my role is simply ‘technical designer’, which is a bit of an umbrella term for someone who designs and implements. I heard a nice description of the role recently that it was like an assistant director – you own a part of a game and work with everyone to pull that experience together.

In demand jobs in the industry right now are definitely anything related to content creation – art, gameplay scripters, level designers. Of course good programmers are always in demand.

That’s best solved in my opinion by having a lead. Often the creative director is keeping watch over everything making sure this happens, but you’re right, it’s also down to you. It’s a skill – being able to take a step back and see the game as a whole. Often this means not getting carried away, you need to realise your system is just a small component and needs to be suitably simple.

When I was younger I felt pretty sure I wanted to do something creative, but I wasn’t really sure what that might be. Game design seemed like an unreachable goal, so while I did a lot of it as a hobby, it wasn’t until later that I really set my focus on it as a career. Animation was something I played with for a long time, and I was lucky enough to intern at the Framestore in London. It wasn’t quite what I wanted to do though, and I ended up going to film school, and eventually learning game programming to get my first job in the industry. It’s been a long path, but I’m so glad I made it because I can’t imagine doing anything else now. Luckily I started young too, or this point would have come a lot later.

I personally believe game design is something that you should not do straight off the bat. I and many others have experienced these people in the industry and they lack a proper understanding of how everything fits together.

Having said that, you can move into design from anywhere – art, design, programming, writing and so on. I think my advice would be – learn how to make games first, learn a skill, work in the industry, always keep designing and building experience, and then when the time is right, it will happen naturally and you’ll be ready for the role. More often that not it will happen in drips and drabs, you’ll get more and more things to design until one day it will be your full-time roll.

There are always difficulties when you work with a number of groups that all have different opinions on how things should be done.

Ultimately everyone is trying to make a good game, as a designer one of the hardest jobs is to try and keep everything on track. You’re often in a unique position where you can see one tiny change can upset the whole ecosystem and stop the game from working.

I have in the past had quite a lot of trouble with IP owners. When you have to make something exactly like a piece of concept art that you’re not allowed to see, well, that’s a pretty tricky situation! The truth is that a lot of the time film-makers have no sympathy for game devs. Some see what we do as inferior so they can be pretty hard to communicate with.

In the end if there is a problem specific to publishers, it’s that they’re not with you in the same room. Long distance communication is where things get turned around. My experience has been 95% of the time, when you finally sit down to talk about something, you actually realise you’re saying the same thing in two different ways.

On Infinity we were, but we also communicated with other teams making other parts of the game across the world. Internally we used scrum. I think some of so-called ‘agile’ development is great, other parts less-so. Stand-ups – small morning meetings to catch everyone up on what’s happening in the game are great, as is relying less on physical design documents.

Working with other teams conflicts with this of course, often another studio will want documentation you wouldn’t have otherwise needed. And yes, time differences and Skype meetings are very ineffective ways to communicate – painfully so.

I had an idea in the last studio, that we would create an always-on two-way video link and present it as if our lunch table was reaching into another room through a big projected screen. Sounds far-fetched but surprisingly easy to set-up. Last I heard they’re still going ahead with the idea.

The thing about design documents is that absolutely NO ONE reads them. It really doesn’t matter if they’re long and detailed, or brief and to the point. They will not get looked at so they’re pretty pointless. You basically need to get into the habit of trying to make the design as visible as possible. You print out your mission flow on enormous pieces of paper and stick them all around the studio. Use whiteboards and post-it notes to do the same with other aspects of the game. Create sandbox levels specifically designed to showcase movement mechanics and enemy design and force load people through those levels when they boot the game.

Ultimately design documents are useful, but only to remind you of the decisions you’ve made. For everything else, you need to think about what teams need to know about what aspects of the game and then present it to them in the most appropriate way. So, you may have a really complex story, but the art team may not read it. Instead you work with the concept artist to make a very well presented colour script and give that to the artists. They can then get the feel for each environment and match it to the story beats.

Well, there’s always The Book of Lenses. That’s a classic. It’s good for beginners but anyone who has really been thinking about game design for any amount of time will find it completely obvious. I would say it’s good if you’re interested in game design but have no intention of working in the field.

Other than that Gamasutra is a great resource – everything on there is just theory, but it’s a good way to get you thinking about different aspects of design. In fact I’ve recently been writing up some of my own thoughts on there (simply under my name) which you can check out. I do try and keep things on the more practical side so hopefully that’s useful to people.

Another nice resource for beginners is a series of YouTube videos by Mark Brown which achieve a similar thing (take with a big pinch of salt), and my personal favourite of course: a YouTuber by the name of Matthewmatosis who does the most astute and in-depth analysis of some of my favourite game series.

Right now, either something Naughty Dog is making because they really feel like the exist in a class of their own – their games take traditional design and push it to the absolute limit. They employ people who are masters of their craft. You could learn so much from every person there. Or, something more experimental. Valve make incredible games that really push the idea of what a game is. And I’ve always had a huge soft spot for SuckerPunch – I’d love to work on the next Infamous game. There’s a real art to how to deliver a cinematic experience in an open world game that is so undefined so far. Being part of that exploration would be fantastic.

I’d like to say a big thanks to Asher for doing the interview. If you’re in the game industry and would like to do an interview send me an email or contact me on twitter.