Have you ever used Virtual Reality?  Whether the big cumbersome headsets in the early 90’s or the sleeker more refined technology of today, chances are you’ve encountered virtual reality in your travels.  It was touted as the “next big thing” in computers and was expected to be in every home but it never eventuated.  Today I’m going to discuss what virtual reality means for gamers and game developers.

I first used virtual reality in 1995 while visiting SegaWorld in London.  They had a ride you sat in, donned a virtual reality headset and furiously pressed buttons to win or lose a battle (along with 20 or so other people).  I was so excited to finally get to use virtual reality that I took a wrong turn getting on the ride and fell off into the hydraulics.  I’m not sure if it was the amazing 3D, head tracking or loss of blood from my injuries but I had an awakening experience.  I knew that in the future, we’d all be playing games using virtual reality, and the world would be a better place.  Unfortunately, this never happened, but is it too late?

Should it be the “Next Big Thing”?

VR has a number of key features that make it the obvious path for game development in the future: 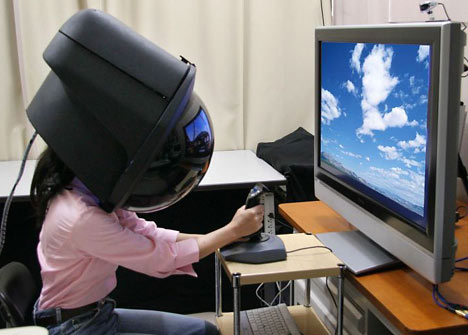 VR also opens up the possibility of relaxation and full emersion games that aren’t possible with regular monitors.  This might sound a little hippie like, but I can see some great opportunities in games for children in hospitals and rehabilitation from injuries.

In my eyes, these benefits make it the ideal candidate for game development in the future.  The current bout of depression leading from the immersion experienced in the “Avatar” movie is proof that even 3D movies are enough to have a greater impact on people (and that some people are fairly weak).

3D movies bring up an interesting stepping stone towards VR.  Monitors are now available with high enough refresh rates that 3D glasses can be used to present a 3D image on the screen at 50Hz.  This might be an easier sell now that 3D movies are becoming more mainstream.  I find it interesting that some people are happy to accept 3D movies as the “next big thing” while dismissing virtual reality as a thing of the past, despite the fact it has much greater qualities.

So why hasn’t Virtual Reality taken off?

There are a few main reasons why Virtual Reality is still not in the mainstream of gaming:

Any other crazy thoughts?

What would a blog post from me be without a reference to Microsoft?  The ultimate way for virtual reality to take off is for Microsoft to develop the headsets.  They make awesome peripherals, have the money to back it and have the console to go along with it.  Having both Xbox and PC support virtual reality would be better for gamers, game developers and give Microsoft more of an edge over the competition.

What do you think?