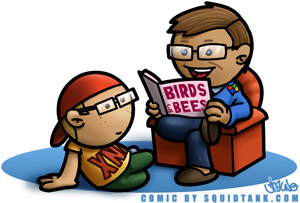 Now that I’ve discussed why you should be using XNA, I’d like to look from the other side and talk about what Microsoft should do with XNA to benefit both developers and gamers. XNA is a great opportunity for Microsoft to get even further ahead of Sony in the current generation of consoles; they just need to make the right decisions to get there.

Is XNA the YouTube of games, and do we want it to be?

I saw a presentation last year from a Microsoft guy who was going on about XNA being the YouTube of games. I’ve also heard it thrown around the web a lot with various XNA articles. It sounds like a great idea, but where is it? Until there’s a means of distributing games easily both on PC and Xbox there’s no way this can be true. I haven’t heard any concrete plans for how they are going to do this.

While I’m a big fan of YouTube, a direct copy is not really feasible for games. You can’t just sit down and watch a game for 1 to 5 minutes. Games are interactive and keeping too close to the YouTube style will pigeonhole XNA games into the casual market. I’d rather see all types of game being developed. The first XNA MMO is going to be interesting. XNA really needs to be user driven, more like Digg. There’s going to be a LOT of content and it needs to be filtered if the mainstream is going to stay interested. I see a few basic options for Microsoft here:

This means that only the best games get through to mainstream users however it limits the number of games that can be released hamstringing creativity. As we’ve seen from XBLA though, it also means that the queues for submission will quickly grow and it may become almost as hard to release a game through XNA as XBLA.

This style would allow anyone to upload their game and users can “digg” or “bury” the uploaded games. This stops the crap from making it into the public eye. Microsoft could make a set of rules for content (explicit material etc) and the $100 Creators Club price tag would keep most people from putting anything bad up as they would be banned. This allows the most freedom for indie developers as the barrier for entry is reduced.

The other alternative is to have a combination of #1 and #2. Firstly, Microsoft could make a simple check over games that are in the queue to make sure they pass a certain quality level. Developers would be able to share their games with other Creator Club members while they are in the queue to be processed and could “vote up” particular games within the queue. Videos and screenshots could be used to “sell” the game so the more buzz/hype there is, the sooner it would be reviewed by Microsoft and released. Once the game is released, a system like #2 would allow gamers to vote up their favourite games and vote down anything they don’t like.

So is it YouTube or Digg? I guess it’s a bit of both. Microsoft really wants it to be like YouTube as there is a crazy amount of viewer hours ripe for advertising. It also makes sense for smaller games which people can play for less than an hour in their spare time. There also needs to be a Digg style system for filtering out the bad games and keeping the most popular games (based on user feedback) in front of mainstream gamers.

What we really want here is for mainstream gamers on their Xbox to see a list of games in a similar way to how XBLA games are currently displayed. Mainstream gamers will be turned off as soon as they waste their time on a terrible game, therefore only games with a large positive number of developers and more hardcore gamers behind it should be shown. The more the list can look like an extension to XBLA the better. Gamers should be able to download a demo and choose to buy the games in the same way they currently do for XBLA games.

I really like the $100 price tag for the Creators Club. It keeps people from just playing around and releasing crap. It’s free to develop games on the PC so experimentation can take place there, where it belongs. Sharing source code is not an option and I’m glad that this requirement has been removed (I don’t think it was ever a long term plan anyway).

We really need the Creators Club community to get behind XNA game releases to keep the white noise away from more mainstream gamers. If these paid members can be the first step in the filtering process it will save Microsoft a lot of time and will have a flow on effect to assist developers as they develop their own games. Keeping the $100 price tag will also reduce the anonymity and trolling that occurs on sites like gamedev.net.

If you have an Xbox Live account, how many MS points do you have just lying around unusable due to the 800 point minimum game purchase? After some quick investigation I’ve found that most people, like me, have about 200-600 points just sitting around unused in their account (thanks Chen). This is the perfect opportunity for XNA games to be priced at 50-400 points and pick up this “spare change”. What’s important is that Microsoft uses the same point system for people buying XNA games as XBLA games. I haven’t heard either way how XNA games will be priced, but it’s important that mainstream gamers can easily buy them.

To simplify the game creation process, a solid world editor will add a lot of value. It could be a simple world builder, with a max/maya style viewer and a simple way to load and save the files within XNA. They should easily be able to add scripting (in C#) and other extras in a later release. This will allow level designers to create level quickly and easily and have them load easily with something like:

I’m interested to hear other people’s thoughts on what they’d like to see from XNA in the future. I know distribution is a major issue for many people at the moment so any thoughts on this would be great.