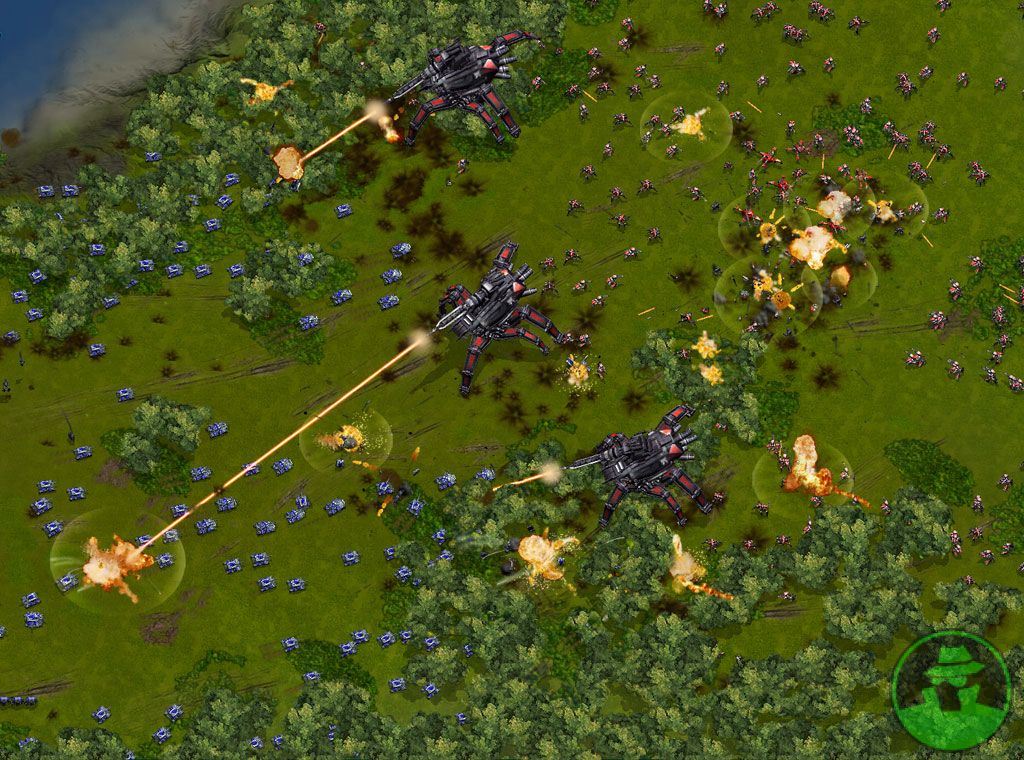 Introduction
Having ‘more’ of everything in a game does not necessarily make it a better game. I’ve spoken about this before with Paraworld and this topic has come up again, this time with Supreme Commander (SC). I was a big fan of Total Annihilation, SC’s spiritual predecessor; however this game seems to have added more complexity in all the wrong places. Quite a few people I’ve spoken to like SC so I thought I’d put down my thoughts to let them know why I am having trouble enjoying it.

2D vs 3D
So why does SC seem to be so much more complex than TA? Part of it comes from having a 3D world, with different camera angles, zooming etc. In a 2D fixed view, artists can create units and know exactly what the player will look like on the screen in the final product. With complete freedom of movement and zooming units appear from tiny dots to huge models taking up the entire screen. This makes it difficult for artists to make each and every unit look different from the others at every angle. If all the units look fairly similar from afar, players have to zoom in to a certain point just to tell what type of unit they are looking at.

Another problem with this is that I spend most of my time in SC zooming in and out. Having the mini-map as part of the world map is a good idea in principle, however it means that instead of just clicking on the mini-map to move to a different area I have to zoom out, move the mouse possibly the entire length of the screen then zoom in again. I much prefer Company of Heroes’ (CoH) approach where a single click brings up the mini-map and all units are represented as small icons showing exactly what type of unit they are. SC tries this however with so many units there aren’t enough icons to differentiate them. The highest fidelity you end up with is the type of unit (air, land or sea) and its attack type (anti-air, ground etc).

Too many units
There are two parts to this problem:

1. Too many different types of units
2. Too many units to control at once

The human brain can only track a finite number of things at once. Having 10-20 units in most RTS games is hard enough to deal with, but having hundreds of units is just unmanageable. The player stops caring about their individual units and starts treating them as groups. Why bother having so many if you will be viewing them most of the time as a whole bunch of icons that move across a 2D map?

Upgrades, Upgrades, Upgrades
SC has gone crazy with the upgrades. Most structures each have to be upgraded individually to get any benefits. What’s wrong with abstracting this away to have upgrades affect all of that particular building/unit type? It seems crazy to spend quite a large amount of game time going around and checking which mines have been upgraded making sure none have been missed. Also, why 3 levels of upgrades? Why not 2? This kind of complexity seems to be in the game just for the sake of it.

UI
I’m also a fan of less UI in games. The first thing you notice in SC is the overwhelming interface. Resolutions have gone up quite a bit since TA, however it seems that less of the screen is actually taken up by the 3D world. At the low resolution I must run the game (on my 6800GT) it seems as though almost half the screen is taken up by the UI, and most of this is just the background image. Surely they could have reduced some of the complexity by hiding it from the user with automation of context sensitive UI.

Resources
For those that like Supreme Commander, I can already hear what you’re going to say:

“But Doolwind, they’ve managed to keep it down to 2 resources, even Company of Heroes had 3”.

I agree they’ve done well to keep them down to 2 in with today’s “more resources = better game” delusion many developers have. The problem here is how they use these resources. When I go to build something, I have take into account how much mass and energy it costs to build; then how much it will use once it’s finished. If I upgrade my mass extractor, I have to do some math in my head to calculate how much mass I’ll lose while it shuts down to upgrade, then how much it takes to actually build the thing. I’ll have to make sure I don’t upgrade too many at once or I’ll have a shortage meaning the upgrade takes longer etc*. Another problem is the fact that some units take resources to fire their weapons. This wasn’t a real problem in TA; however with of SC’s other complexities and now even more units that can eat resources it becomes unmanageable quickly.

*I am aware that you can pause the upgrade; however it seems they fixed the effect of the problem (players often make a bad decision) rather than the cause (that the resource model is too complex).

Conclusion
While Supreme Commander isn’t terrible, I’m trying hard to enjoy it, but so far I haven’t. I’ve did buy it however I’m sure it’ll probably be on my shelf and I’ll be back to playing CoH in a short time. I love my complex/deep strategy games; however I love the complexity in the right places. Players should be choosing the arcs of fire or types of units to build to counter the enemy; not remembering whether they have 20 mini-assault anti-air amphibious attack tanks or 30 of them. The idea behind SC is a grand one, and I wish it had worked, I really do, however it didn’t. Maybe it would have been better to build some decent AI that could actually manage the hundreds of units. If I have to watch another of my anti-air units run up and stand next to an enemy ground unit they can’t even attack or accidentally win a game because the enemy commander is so stupid it just stands there until it’s destroyed, I think I’ll scream.