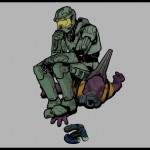 The biggest change I’ve seen in our game development lives in the last few years is the ubiquity of high quality game engine tools. It’s no secret that I’m a big fan of Unity and we’re currently using it to create our third game. Unlike our first two games, this time we’re planning to release on no less than 4 platforms simultaneously. Without the power of Unity this would simply not be feasible for a small indie company that’s still in startup mode. I’ve heard the promise of “write once, deploy anywhere” a number of times in the past but it seems like this is the first time it’s actually come true. Unreal and CryEngine are now free giving indie’s great access to high quality development tools.

Along with multi-platform support is the breadth of features found in these tools that means we can create small to medium sized games with multi-month development cycles with only a single programmer in the team.

Internet communication has reached a level where we can build an entire game together from the comfort of our respective homes. Leasing an office at this stage in our company would cost more than the rest of the games development combined. With the use of Skype, Dropbox and Acunote we can work seamlessly together sharing ideas and large files as if we were in the same office. There’s still a few issues that come up, but most of these are resolved with weekly face-to-face meetings. We’re still planning to get an office in the near future, however it’s not as pressing a concern as it has been in the past.

Something else that’s changed considerably since I left mainstream game development is the number of platforms we can target. It’s easy to take this for granted, particularly as they’ve grown at a fairly linear rate over the past few years. I’ve always been a firm believer in letting a game design pick the platform that suits it best, however not until recently has this been a feasible option for indie game developers. We can now choose between console, mobile, web and more traditional platforms and have the ability to target them with even the smallest budget. With the barrier to entry being measured in the hundreds of dollars even a hobbyist student can forgo drinking for a few weeks to fund their next game.

I’m continually frustrated with the time it takes to create games. Every game I’ve ever worked on has run overtime, often by over 50% of their original estimate. After speaking to other developers, thankfully this is not just something I struggle with. I’ve found there are two major milestones a game developer reaches in their career. The first is actually finishing a game, something I had trouble with when starting out (I still have countless half-finished projects laying around my old HDD). The second is finishing a game within the original estimate, something nearly every developer I know still struggles with no matter how many years they’ve been working.

I spend considerable time and effort trying to solve this problem and I feel as though each project we refine our process and things are slowly getting better. Despite my first point, I feel tools are the biggest opportunity for us to solve this issue. When I started out in game development I had a very negative view on tools development and felt it was not my job to create tools. I’ve since learnt this is a very closed minded view of game development. Team Bondi’s recent game (and closure) is a perfect example of this. I’ve heard a number of developers share anecdotes of the development where making simple changes (such as the placement of a trigger) would have a turn-around time measured in the tens of minutes. Small issues like this add up over time and cause games to blow out their time and budget.

I left Auran two weeks before it closed down back in 2007. Since then I’ve watched as many of my closest friends and ex-colleagues lose their jobs as the number of large studios dwindles. There are countless reasons for this downsizing but what’s important is the fact many of the smartest people I’ve worked have been forced to move overseas to find work in the game industry or worse, move into more mundane jobs to make ends meet. I am hopeful that the growing number of independent studios forming from the ashes will see success and we will have a second chance at building the Australian game industry while learning from our previous mistakes.