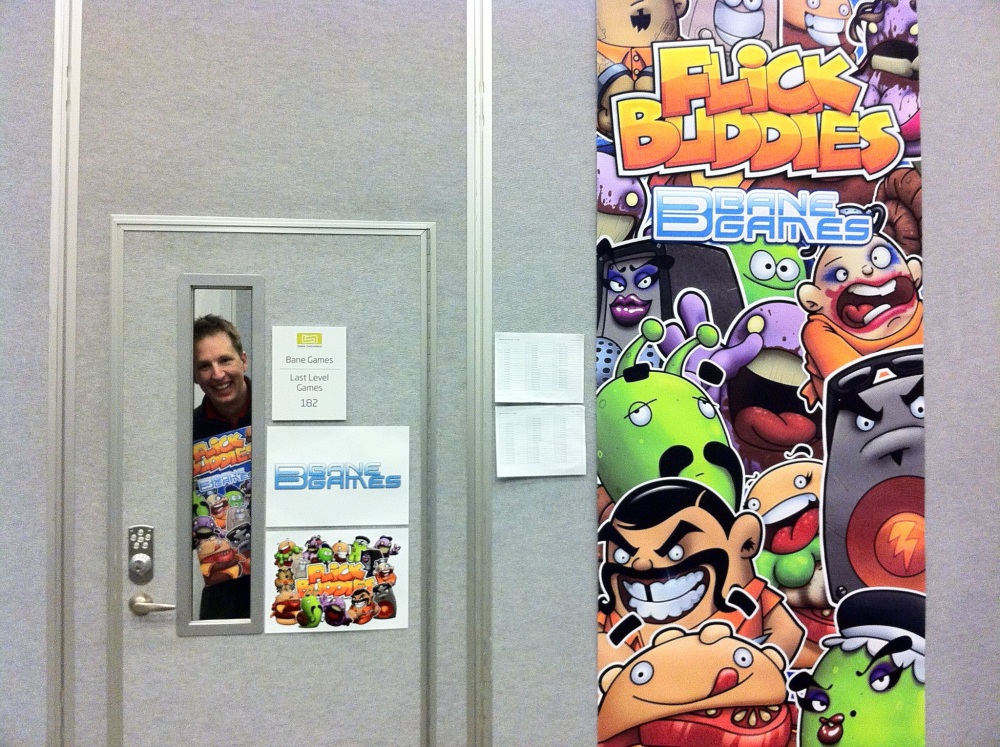 I spent last week at GDC and 1.5 days of that in Game Connection. I was taking prototypes Bane Games’ next games to show publishers to see if we could get a funding or publishing deal for them. Today’s article is my thoughts about Game Connection and whether other Indie’s should go next year.

Game Connection is described as “speed dating” with publishers. We had 30 minute meetings with as many publishers as we could cram into our time. We had 1.5 of the 3 days Game Connection runs for as we shared a booth with the guys from Last Level Games. This ended up being ample time for us as we met 22 publishers and a few PR/marketing people. Our goal was to form contacts and show off our two prototypes we are developing for iOS, Android and web.

This “speed dating” style was a great way to get in front of publishers we would otherwise never have a chance of meeting face to face. Being from Australia, we are on the other side of the world to many of the publishers, particularly the larger ones. Also, there are a lot of developers pitching their games and having this condensed period for us to briefly meet was perfect.

I had heard from a few people that it is frowned upon for publishers to turn down a meeting with you no matter how small you are, which is perfect for a small team like ourselves. Thankfully, this was true. Nearly every meeting I proposed was accepted and we managed to meet all the publishers we were hoping, from the largest to many small unknowns.

The process for setting up meetings is fairly simple. A few weeks before the event, the system opens up and you can request meetings with as many people as you have space for. After a set period this shuts down and the system automatically matches you together and sets up a room for the two parties to meet. For the most part, we stayed in our booth (about 3x3m) and publishers came to us. Any spots that are free after this time can then manually be filled in with other publishers. The system does a good job of letting you know whether you both have a free spot at the same time.

My only complaint about this system is it’s a little harsh as I ended up having 16 meetings in 8 hours on my first day. This left me no time for grabbing lunch, let alone a break to use the amenities. Thankfully some of the meetings ran under time (and I had a single no-show) which gave me time to dash off for food and a comfort stop.

Our two prototypes were very much in the prototype stage. I had spent a couple of days coding them and our artist had put a few hours into turning my primary coloured abomination into a nice looking tech demo.

Despite the simplicity of the demos every publisher could see the core of the game and judged it upon its merits. I was blown away by the response from the publishers with all but four giving us amazing responses. Everyone loved the ideas with a number of people giving amazing feedback within only minutes of seeing the games. We even begin discussing specifics of deals with a number of publishers during our short meeting.

One of our demo’s particularly shined and based on the feedback we received we have decided to pursue it next and look at our options for funding and publishing with the people we’ve met. Unfortunately I can’t give any more details as we move forward with our dealings, suffice to say we are extremely happy with the response.

We were extremely fortunate that the Queensland Government helped pay a large percentage of the usual cost of taking part in Game Connection. This support combined with sharing a booth made it affordable even for a small indie developer such as ourselves. If it weren’t for this, we likely would not have been able to justify the full price of 2,700 to 4,700 Euro’s for the event.

This cost will also likely be restrictive to many indie developers. It makes it hard for me to recommend the event to smaller developers where this amount of money makes up a substantial amount of their entire game budget. It really comes down to what you want to get out of the event. We managed to talk to many of the big publishers and a lot of smaller publishers from around the world that we would simply never be able to meet. If you factor in flying overseas to meet with a publisher this price point quickly becomes reasonable for the sheer volume of people you can meet.

I highly recommend any smaller indie thinking of taking part in Game Connection next year to check out the competitions on offer such as this years.

Should You Participate Next Year?

I highly recommend Game Connection to anyone looking to get their game published. It’s the perfect place to meet with a multitude of publishers to cast out the widest next possible. We found a few publishers we’d never heard of that seem like almost a perfect match for our small indie team. Meeting face to face is vitally important and this was a great way of achieving this.

In the end, it really comes down to the money. If you can afford $2-4k Euro’s then I highly recommend, however if you can’t I’d recommend petitioning your government to see if you can get assistance as we did. I would love to see an “Indie” pass or similar offered by Game Connection for a shorter time at a lower cost.

Have you been to Game Connection or do you plan to go next year? Or is this cost simply too prohibitive?