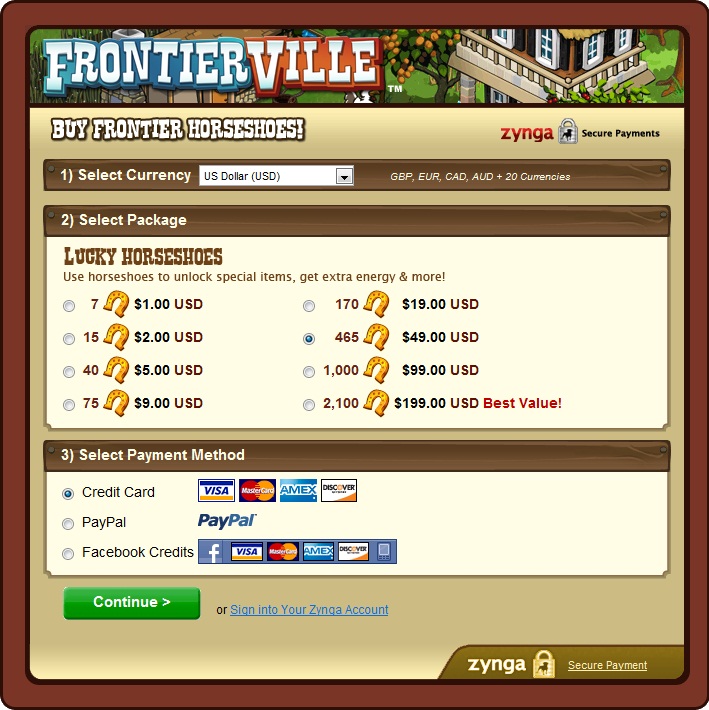 How much do you think it costs to play the average Facebook game if you pay to play?  While at GDC this year I spoke with a number of Facebook game developers about the spending habits of the average Facebook gamer.  They told me I would never believe how much money the average “soccer mom” gamer was spending, and they were right.  After some quick research I found that a game like FrontierVille can cost up to $60/hour.  That is more than any other video game, ranging from arcades to subscription based MMO’s.  Are payments of this magnitude sustainable?  Today I discuss how we can make sustainable games for Facebook and convert the new, huge, Facebook market into long-term gamers.

After my last blog post I was asked my thoughts on FrontierVille.  I fired it up and started playing.  I immediately hit a snag as I needed energy to continue playing.  Energy is used to perform most actions in the game.  There are three options for acquiring energy:

None of these are very inviting to me.  In fact, they all make me want to switch off the game and play something else.

I decided to investigate how much it would cost if I chose the third option.  I found that 7 points lasts me about one minute.  This equates to:

And that’s just for energy alone!  You can also buy other items in game which don’t add to your energy reserves.

This kind of cost is not sustainable long-term.  People will either end up spamming their friends, paying ridiculous amounts of money or letting the game dictate when they can play.  While current Facebook developers may be happy to cash in on this it is not going to last.  There are two options for gamers from here.  Facebook gamers will find better alternative Facebook games, or they will stop playing Facebook games entirely.

Game developers have the perfect opportunity to reach a massive audience with deep and meaningful gameplay.  This audience also has an extremely large disposable income which can be tapped.  If we don’t take advantage of this, the droves of mainstream gamers entering the market will disappear as quickly as they arrived.  Giving a deeper experience than these expensive, spam-driven games will help to capture and grow the audience.

There are a number of steps we can take to make Facebook games more sustainable.  I’m not suggesting we stop micro transactions and wall posts entirely; we just need to be more respectful with how we use them.

Players should get a solid reward for their time and money investments.  This expenditure should be treated more as an investment than just the cost of playing.  Players should be encouraged to spend as much as they like, but should also be rewarded in valuable ways.  By adding value to the gamers experience they are more inclined to continue paying as they see a direct correlation between enjoyment and money spent.  Currently the only correlation is between game time and money spent.

Wall posts and “spam” are a necessary evil of viral and social marketing.  The current drop in numbers has shown that they are an ideal way of advertising the game (the limitation on spamming ability of games directly relates to decline in number of players joining).  This viral marketing should be done in interesting ways that add value to the player, rather than being superficial requests for or sharing of items.

Rather than wall posts simply asking for things, or “sharing the good news” developers need to look at the core gameplay mechanics of their game and have a thread of continuity to their posts.  The main problem with existing games is the lack of deep and meaningful gameplay means there is little the gamer wants other than more of everything in the game.  Game designers need to factor wall posts and the like into their game design at a foundational level if they want any meaningful effect on gameplay to be seen.

With the right attitude and a good portion of respect for the player, we can turn this large audience into large revenue for the games industry.